After nearly two decades of peerless pop, the Jazz Butcher can't lose for breaking up. 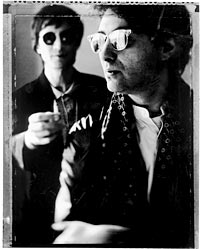 ALSO: Read our Web exclusive interview with Pat Fish of the Jazz Butcher.

The vexing thing about cult bands is that they're often famous only after they've broken up. Worse still, their sphere of influence on other musicians is much, much wider than their sales and influence on above-ground pop culture. Ergo, one of Britain's wittiest and stylistically adventurous songwriters, Pat Fish (aka the Jazz Butcher) is doubly damned.

First off, the cult of the Jazz Butcher and his nebulous group of co-conspirators includes two-thirds of Love & Rockets (or half of Bauhaus, if you prefer), Sonic Boom of Spaceman 3, members of the Blue Aeroplanes and countless closet musical romantics around the globe who have been saved by Fish's writerly wit and heartfelt pop music gemstones. Secondly, the bugger can't seem to break up the band or to stop making gorgeous records!

The trail of sidemen and cohorts is long and twisted, but when the Jazz Butcher rolls into town next Wednesday, it will be with the core group of musicians that comprised the Jazz Butcher Conspiracy, the band that first brought Fish's particular musical magic to public light and critical acclaim in the mid-'80s.

Ranging from the first records of folk-infused punk – equally informed by the Velvet Underground, Jonathan Richman and Northern Soul – to dissonant, feedback-enhanced, emotionally threadbare rawk, Fish has never left his musical or lyrical wit at the door. In fact, though the cast of characters in his orbit has changed, Butch's alternately heartbreaking and biting portraiture has been what keeps his bigger-than-you-would-imagine cult coming back like the quality-starved listeners they are.

There are few songwriters who imbue their songs with such a sense of place and populate them with memorable characters as acutely as Fish.

The Jazz Butcher is exactly that band you want to share with friends you know appreciate good beer (and lots of it) and who can stand still long enough to get swept away by genre-defying pop poetry. Not that Fish and friends have stood still that long. In fact, the band's trip back to the world of live performance is a journey touched with serendipity. And Fish obviously enjoys the "getting there is half the fun" pace he's set. As he says of his latest record deal with indie label Vinyl Japan:

"(Jazz Butcher guitarist and vocalist) Max (Eider) and I went down to have a chat with them. The chap said, `We'll give you a small advance, 500 pounds for recording and 2000 pounds for beer,' and we went, `Yep.'

"As the Butcher was splitting up in 1995, for the last few gigs, Max had been showing up (after a 10-year absence from the Jazz Butcher fold) and when we did our last gig we left it on sort of a half note," says Fish from his recording studio in Northampton, where he's wrapping up the new record.

"But in August `96 a weird thing happened. Some guys down in Majorca wanted to book us and they didn't know we'd split up. We thought, hell, it's a trip to Majorca. And Max went along on that. So, when we finished that we thought, `There it is. Now we can stop.'"

That was before two ardent fans invited Eider and Fish to play at their wedding in Seattle with members of the Posies.

"That's what really got us back together," says Fish. "The joke is, it's their band, we just play in it."

Now, touring in support of the recently released live album Glorious & Idiotic (on ROIR records), Fish has to concede, "Well, I guess we're back, then, aren't we?"

But, for a band that, since 1983, has let the public in on nearly a recording a year one way or the other, it's par for the journey.

And it all started (yet again) with an innocent vacation.

In addition to the Jazz Butcher Conspiracy's performance, C-Pop gallery and its proprietor, Rick Manore – an unabashed and rabid Jazz Butcher fan – will host a special one-night exhibit of drawings by Pat Fish and Ann Arbor comic artist Dave Coverly (he of "Speedbump" fame). For his part, Fish will contribute elaborate, hand-drawn maps of nonexistent towns.

"Most people play Sim City. But I just got a computer recently, so, I'd sit around and, instead, draw maps of imaginary towns," says Fish.

C-Pop will also exhibit drawings by Coverly based upon and accompanied by the lyrics to the Jazz Butcher song "Buffalo Shame," from a collaborative children's book-in-progress. –CH