The Newsletter Of The Group That Doesn't Exist 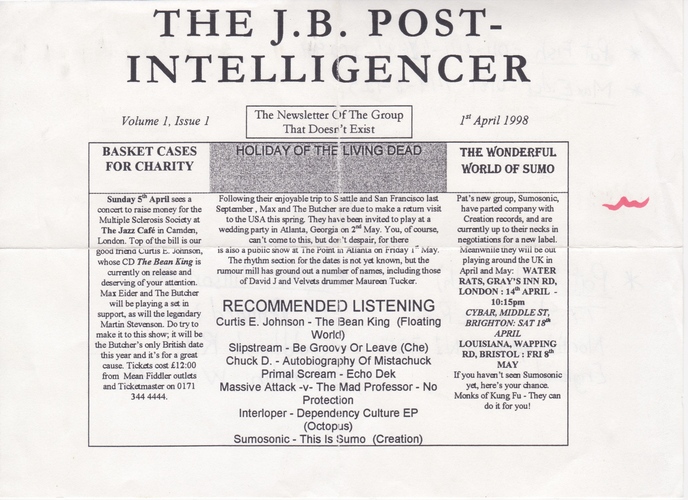 Sunday 5th April sees a concert to raise money for the Multiple Sclerosis Society at The Jazz Cafe in Camden, London. Top of the bill is our good friend Curtis E. Johnson, whose CD The Bean King is currently on release and deserving your attention. Max Eider and The Butcher will be playing a set in support, as will the legendary Martin Stevenson. Do try to make it to the show; it will be the Butcher's only British date this year and it's for a great cause. Tickets cost #12:00 from Mean Fiddler outlets and Ticketmaster on 0171 344 4444.

HOLIDAY OF THE LIVING DEAD

Following their enjoyable trip to Seattle and San Francisco last September, Max and The Butcher are due to make a return visit to the USA this spring. They have been invited to play at a wedding party in Atlanta, Georgia on 2nd May. You, of course, can't come to this, but don't despair, for there is also a public show at The Point in Atlanta on Friday 1st May. The rhythm section for the dates is not yet known, but the rumour mill has ground out a number of names, including those of David J and Velvets drummer Maureen Tucker.

THE WONDERFUL WORLD OF SUMO

Pat's new group, Sumosonic, have parted company with Creation records, and are currently up to their necks in negotiations for a new label. Meanwhile they will be out playing around the UK in April and May: WATER RATS, GRAY'S INN RD, LONDON : 14th APRIL - 10:15pm
CYBAR, MIDDLE ST, BRIGTHON : SAT 18th APRIL
LOUISIANA, WAPPING RD, BRISTOL : FRI 8th MAY
If you haven't seen Sumosonic yet, here's your chance.

Monks of Kung Fu - They can do it for you!