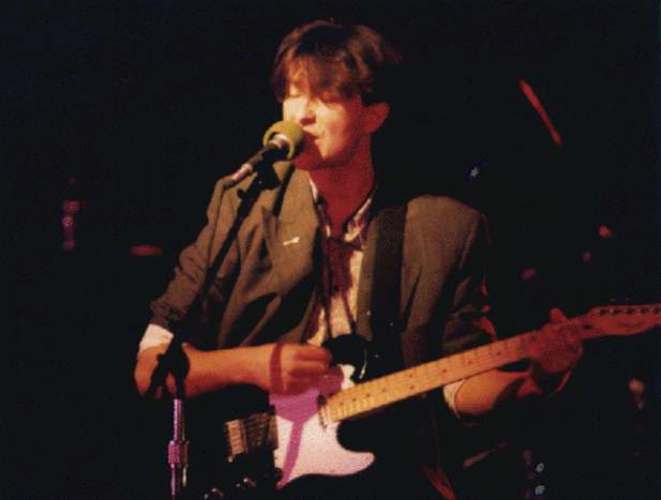 In ten years, the Jazz Butcher has undergone more transformations than most bands do in several lifetimes. Led by the Jazz Butcher (aka Butch; in truth, Pat Fish ) himself, it is, regardless of incarnation, his lyrical witticisms and humorous critiques around which the group's music revolves.

The debut LP, Bath Of Bacon, is for all intents and purposes a one-man show. Butch plays a startling array of instruments, from guitar to xylophone, and employs a legion of session musicians to help create an album that encompasses an awesome variety of styles. Good ideas abound in songs like Zombie Love , Sex Engine and Grey Flannelette ; there's just some uncertainty as to where they're going.

A Scandal In Bohemia, the second album, was recorded by a stable quartet that included ex-Bauhaus bassist David J. . Almost exclusively in a folky pop-punk format, the songs are better developed and reach logical conclusions. Amoung the gems are a hysterical anti-macho anthem Real Men (`Some things never change / Notice how they never sit together on buses?') and Southern Mark Smith .

The Gift of Music is a collection of single sides, an excellent package that affirms the band's folk-punk commitment. Of special note is the early up-tempo version of Southern Mark Smith and the pop gospel Rain .

Sex And Travel is the Jazz Butcher's crowning achievement. The eight near-perfect tracks run the gamut from funk to folk to country-western and punk. Butch's lyrics aim high; subject matter, more than anything else, defines the style of each song. President Reagan's Birthday Present addresses the problems of America, Russia and nuclear arms with a healthy chunk of dance funk. Holiday uses a typewriter backing track and cabaret stylings to make light of the staid British persona; the frantic adrenaline punk of Red Pets tackles preconceptions about Russians (`Everyone says that they lift weights/Except for me I think they're great'). All of this, plus two great pop tunes: Big Saturday and Only A Rumour . (One CD joins Sex And Travel with A Scandal In Bohemia)

With a new bassist replacing David J. (off to rejoin his old bandmates in Love And Rockets), the rechristened Jazz Butcher and His Sikkorskis from Hell issued the live Hamburg LP and an EP, Hard which picks up where Sex And Travel left off, adding blues and merseybeat to the seemingly bottomless bag of musical tricks. Bloody Nonsense is an American collection that includes some of the above-mentioned tracks.

Leaving the rest of the band by the wayside, Butch and guitarist Max Eider then released a four-song 12-inch, Conspiracy. The best things on it are the title track, a clever play on rap music, and the hilarious homage, Peter Lorre .

With Butch and Max as the nucleus, a newly formed Jazz Butcher Conspiracy recorded Distressed Gentlefolk. A Jazz Butcher record by any other name, this album reveals the usual diversity -- folk ( Still In The Kitchen ), funk ( Big Bad Thing ), country-western ( Falling In Love ) and pop ( Angels , Nothing Special ) - as well as Butch's ever-incisive wit, which is in rare form on the track Domestic Animal .

Shortly after Distressed Gentlefolk, Eider resigned his Butchership for a solo career. Best Kisser in the World is a beautifully romantic record consisting of soft rock ballads and jazzy torch songs. Max's vocals replicate Butch's almost exactly; only lyrical content provides a decisive difference. If the Jazz Butcher has a sane and serious alter ego, Max Eider is he.

In 1988, a two-person Jazz Butcher (Butch and Kizzy O'Callaghan ) released the fifth proper LP, Fishcotheque, proving the Butcher to be as resilient as he is prolific. Reorganisation has had no effect whatsoever on Butch's abilities, and this record rivals Sex And Travel in its brilliance. Next Move Sideways , Living In A Village and Chickentown are sterling.

Big Questions is an assortment of tracks (including Grooving In The Bus Lane , Rebecca Wants Her Bike Back and Olof Palme ) drawn from previous releases by the Jazz Butcher, Sikkorskis from Hell, Conspiracy and the Jazz Butcher Conspiracy. Limited quantities of the original pressing contained a live 7-inch EP.

As Butch insists in his liner notes, Spooky (EP) "is not an LP; it is a single and a radio session nailed together for your enjoyment". A smoky cover of the titular Classics IV hit and an extended version of Fishcotheque's silly chicken rap The Best Way highlight the new stuff and the Montreal radio broadcast sounds quite all right.

Big Planet, Scarey Planet, Butch had acquired a fairly steady group of sidemen, losing not a morsel of his keen wit or musical individuality. He even reveals a renewed vitriolic vigor in Bicycle Kid (a hilarious tale of working-class juvenile delinquency) and Do The Bubonic Plague (a lethal dance craze). Sharply observant and masterfully executed, this is a record from a band that has well earned its reputation for eclecticism. Sheer entertainment.

Cult Of The Basement opens with an instrumental that sounds like the Ventures performing at a Greek wedding. A Mediterranean refrain wafts through the rest of the LP, subtly linking the thirteen cuts into what is as close to a ``concept'' album as the Jazz butcher is likely to make. (What the concept might be, however, is anyone's guess.) Nevertheless, on The Onion Field Butch manages to flawlessly replicate Nick Cave's stripped-down gothic atmospherics. And faced with song titles like Daycare Nation and Turtle Bait and a sweet lullaby called Fertiliser , one can only smile and enjoy. If the wild psychadelic raveup of Panic In Room 109 is totally incongruous, it's also perfectly in synch with the rest of this wonderful collection.

Edward's Closet is an unessential compilation containing Spooky and an assortment of album tracks from 1987-'90.

Transcribed from the (by now out of date) fourth edition of The Trouser Press Record Guide by Ed Carter.

Used with permission of the authors.