THAT TRIBUTE ALBUM IN FULL 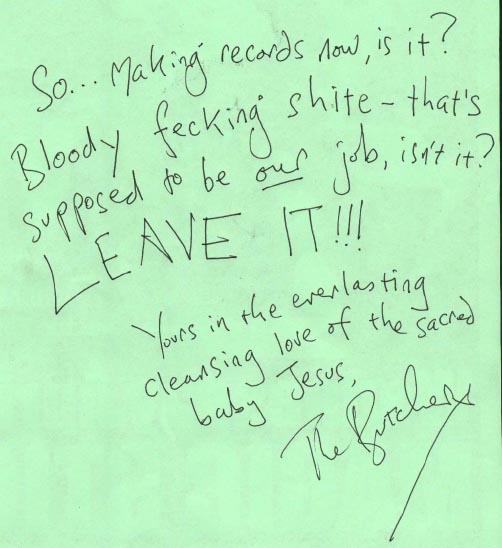 Living - as you do - with a Nameless Dread, I was anticipating the arrival of the JBC tribute record with some considerable furrowing of brow. It was surely going to be the Mother Of All Embarrassing Things. A number of good old pals were there for the losing. Just for afters, the last fifty people on Earth not to consider me a terminal wanker were about to have their minds changed for good. Walls would collapse as the Big Tanks rolled. Guatemalan rough-riders would pick off the stragglers in scenes of terrible peyote-crazed carnage. Frankly speaking, the whole project just seemed to ooze foreboding.

And so it rushed forward, chirping aggressively, with mandibles spread and antennae lashing.

Dave Coverly brought the record over on his visit here last weekend. When I asked him what he thought about it he gave his magic dry smile and said that he didn't want to say anything before I heard it. Fair enough, I thought, here goes..

And you know what? I really had a great time listening to it. Nobody got the words wrong (except those of you who got them all wrong on purpose), there's some great playing and, best of all, some wicked ideas.

Personally, the first time I played it, I started with Disc Two (Yeh, I know..) and I'm glad I did, if only for the extraordinary kick-off that it gave to what was threatening to be a scary experience. For the purposes of my wee review, however, I shall start where I should, at the beginning. I should also point out that, when I first heard the record, I had (with one or two exceptions) no idea who any of the recording artists were. I only looked up the track listing on the internet today when I went to put this piece together.

And that's it, except to say that it was all so very much more pleasurable an experience than I had feared, with lots of laffs, thrills and shivers along the way. Some of it really blew me away. Special Awards go to Darling Clementines, The Limit Club, The Gong Factor, Muppet Ranch, Marko Van Haddock and Southampton's Leading Weird Bloke, but most everything here has rocked JBC Mansions after its own special fashion. Last, but not least, I'm flattered - yea, even unto touched - that you guys all thought it was worth the time and trouble.

Hearty congratulations and thanks to all involved! You'll be hearing from my Solicitors shortly.

PS - Have a rockin' good Christmas!

* UK Reader ~ Coverly and the JBC had their photo on the front page of the Guardian. We happened to be riding in the London Eye when the Christmas fireworks went off. We're up there at the top of it in the sky. Thank you.

This is the DISCLAIMER. Please read it. Thanks!

Pat, and his legal counsel, have been kind enough to give us the thumbs up on this fun little list project. He could have easily said no, so let's all raise our glass of whatever and toast to his health and kindness and well-groomed hair.

Of course, there are several conditions we must abide under. Firstly, we all understand that the sole owner of any of these works, whether you are singing them or not, is the JBC. Just because you are doing the cover version does not give you any rights toward it's ownership. This means, you cannot put your JBC tribute song on your own band's cd and sell it for money (not unless you go through the proper channels and arrange for royalties to be paid.) This also means that you may not sell your JBC Tribute cd (no, not even on E-bay... leave Ebay for those who know how to use it, like David J.) All in all, don't do anything that's gonna piss Pat off...

The JBC Tribute cd is for the list only. It is for fun. Failure to have fun with it is a horrible crime. Horrible...

Sorry about the lecture, but I had to do it.

Visitor Feedback
Visitors' comments for this page [Add your own]
Thanks

Good stuff, thanks for sharing it here.
Jg

Nifty stuff here, thanks much.