The Jazz Butcher
Contest Invocation
Sitting around the house with Curtis and Terry Walpole a week or so ago - we came up with a plot.

Folks send in photos of themselves, their loved ones, their family pets, whatever...being MAD in jbc leisurewear. The maddest ones win prizes, which we have prepared over here (home-made CDs of Jazz Butcher-type slush produced in the living room on a commission basis, basically).

It may be, of course, that Mad Brody Culpepper and Mad Terence Walpole have already got this thing sown up. 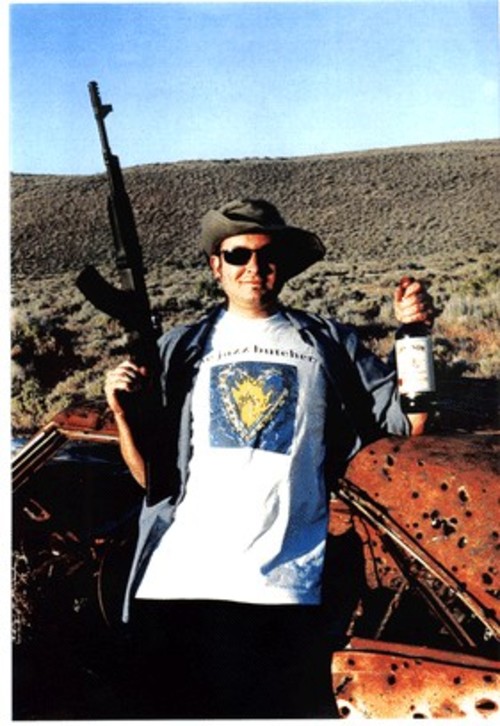 Mad Brody Culpepper
Most probably taken in the Neveda desert during the burningman festival. 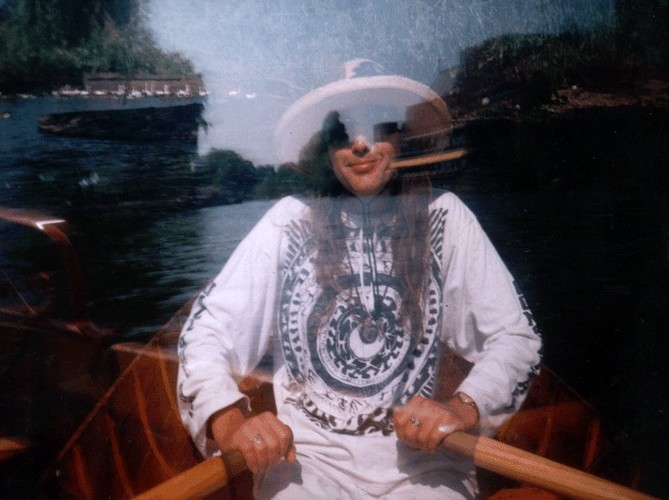 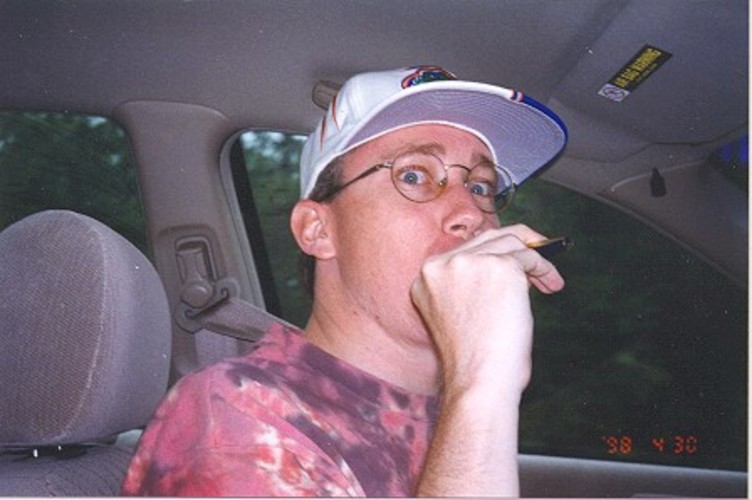 Steven J Hall
Unfortunately, I don't have any JBCwear (but I want some - give me a source!), but here I am playing the kazoo to the D.R.I.N.K. trombone solo, while driving from New Orleans to Atlanta for the 5/1/98 Pat&Max show. I was annoying the hell out of the passenger/photographer. 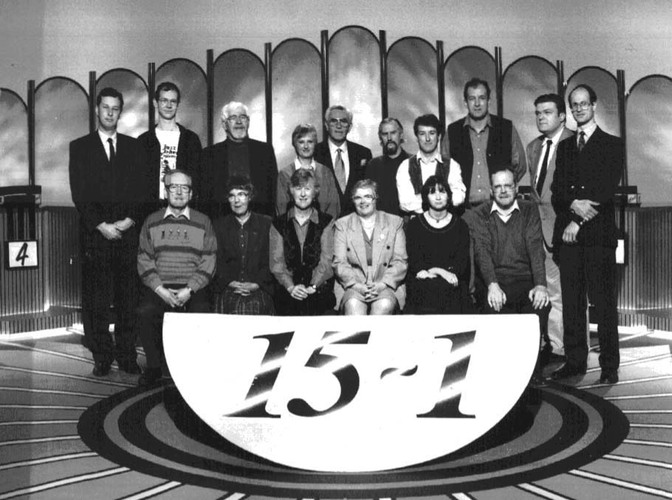 Dr Edward Carter
enclosed, one scan of me wearing a jazz-butcher (actually chris' jbc-list) t-shirt on "Fifteen to One", a nationally-broadcast daytime quiz show. This is the "souvenir" print they kindly send after your humiliation. Even if this borders on the tragic rather than the mad, I would like to point out that I qualify by virtue of being surrounded by the insane, the old and the unemployable (who, together, constitute the entire audience and competitor pool). 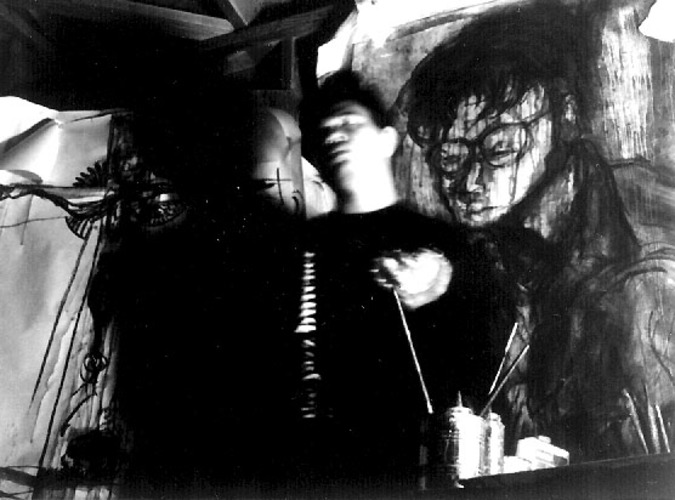 Lito Vales
Here's a pic i found of me sporting the good ol' "condition blue" t-shirt in my old painting studio. 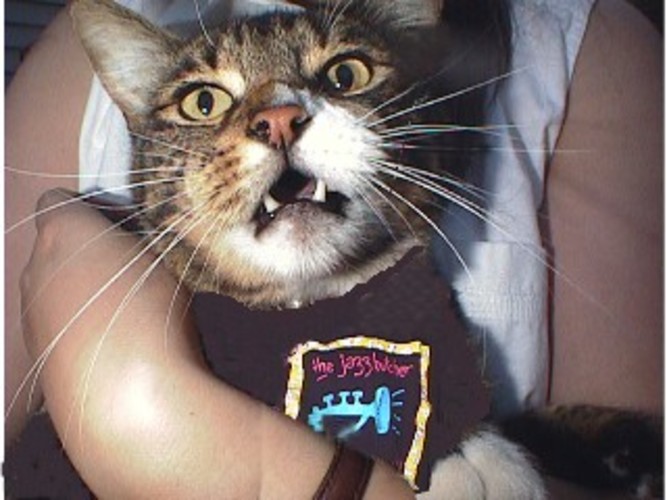 Roger Pace
Still doesn't understand why British cats don't like good 'ol american catnip, but believes if more muscicians were named fish the world would be a better place for cats. 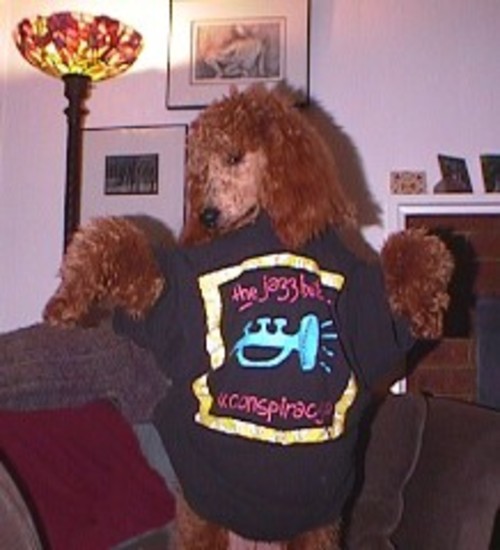 Fern Frangooles
A young puppy still finding her music, and due to indoctrination attempts by her people is considering the merits of JBC records as chew toys. 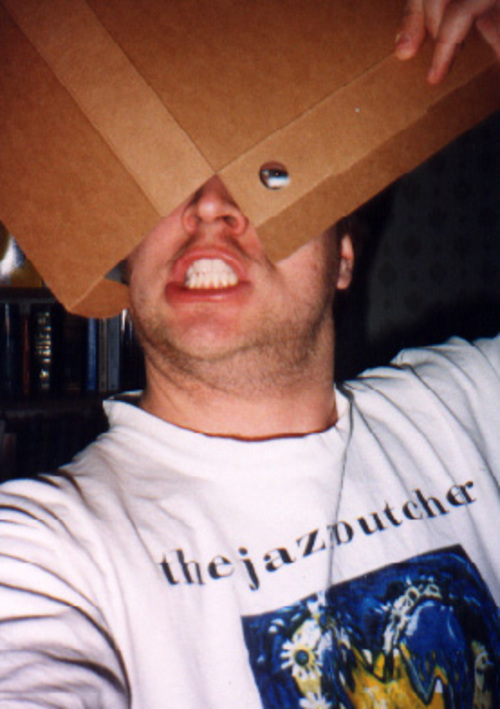 Ken Miller
After being off from work for 9 days straight and not shaving, generally being nutty with a cardboard box. There are some other ones involving a goat grazing on some trash, but you can't really see the JB shirt in those, so I didn't send them. 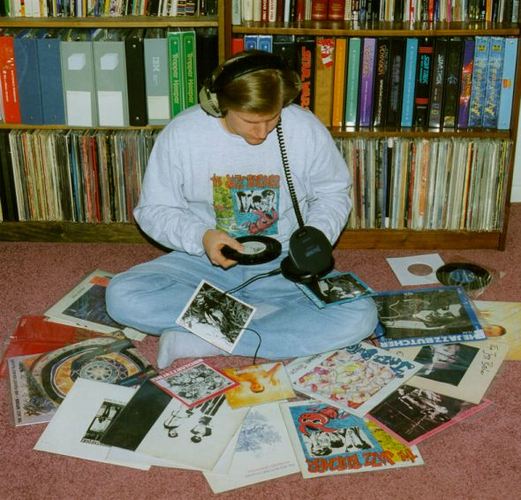 Robert Ferin
This picture depicts the very start of my maddening as I attempt to play my JBC vinyl in my CD player in my home-made JBC shirt. You don't want to know what happened next, it is much too disturbing. Please make a special note of my madness in that I am wearing vintage 1970 "high fidelity" headphones. I want my JBC! 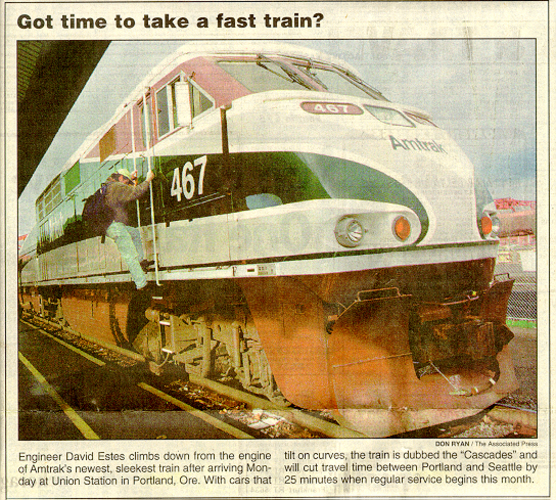 David Estes
My JBC leisure-wear once included a Condition Blue and a Big Planet Scary Planet shirt but my equally mad wife had a bad habit of maintaining her "natural" red hair while wearing the above mentioned shirts. This led to some anger on my part and the demise of the leisure wear. The photo attached was in the press recently. If they only knew who the driver was the article would have said: "DO NOT ride this train, DRIVER IS MAD!" 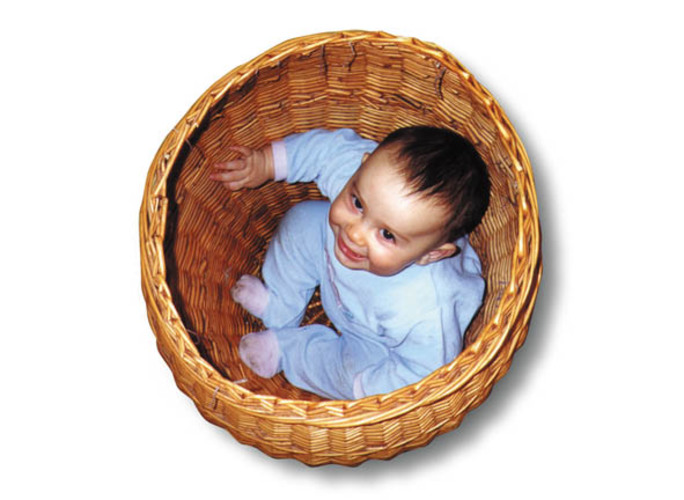 Joseph Tampieri
This is a picture of my son Joseph, he is 11 months old and a great Jazz Butcher Fan. As you can see he is not wearing a JBC shirt because they don't make them in his size, but we can honestly say we are enticing him out of his favourite hiding place (the laundry basket) with a copy of our "Waiting for the love bus" CD in one hand and the cry of "Pat Fish is coming to get you!" It always works.

Contest Results
Here, as promised, are the results of the Icelandic Jury.

Winners: Mad Brody Culpepper (it wuz always gonna happen...)
Mad Doctor Ed (I often watch that show myself, Ed...)
Mad Roger "The Cat" Pace (even if he cheated, any cat that work Adobe Photoshop all by himself deserves a prize!)

Each of the above should send in a mailing address. They will then receive a CD of soppy shite from the archives of NN1.

Honorable mentions to : Nearly-Mad Ken Miller (we love the old carboard-box-on-the-head routine round these parts) and Dave Estes, mad enough to travel from Olympia to Hamburg to see a bunch of old boys getting drunk and giggling. These gentlemen receive nothing until we get into the same room as them. We shall then buy them a beer and mock them ruthlessly (for that is the kind of guys we are). Thanks to one and all who entered the competition and livened up our long winter evenings through the Magic Of The Internet.

1989 soundtrack is playing through my life. thanks for the memories, letting me tag along a bit on the Condition Blue tour, and for making me sway when I needed to sway. chin the fuck chin you sloppy bastards. shout out to Iain with two I's where ever the fuck he landed these days.

need to get your approval for putting Angels on my new compilation " music for Adult Vampires, Volume 3. Will send you tracklisting and music once I have heard back from you.
Love always,
Steve

There was me looking for Mitch's site and look who I found! How are you doing, you mad bastard?

YOU ARE THE LOWEST SCUM OF THE UNIVERSE FOR TAKING MY BANDS NAME. I WILL SUE YOU IF YOU DO NOT RENAME YOUR BAND. YOU WILL BE SUED FOR EVERYTHING!!! HAVE FUN!