His passing has deprived Northampton of its most unique and life-affirming character, and one of the truly great original British artists of the day. The fact that Tom was not a household name around the English-speaking world merely bears witness to what a sad, grey place that world had already become. Without him here with us now it's a whole lot worse.

Long before I ever moved to Northampton, Tom toured the world with a pretty well-known folk aggregation called the Ratcliffe Stout Band. His song John The Road tells the tale. I dare not even put it on. It used to make me weep even when he was still around, probably drinking at The Cricketers just around the corner from my house. I really don't know what the little fucker would do to me tonight.

But it's just no good. You all know how I feel about English folk music - down by the old muthafucking canal. To call Tom a folk artist is like calling Marcel Duchamp a dauber.

Tom recorded an album, "Watering The Spirits" in 1994 when he was already almost 50 years old. Alan Moore helped him to get it done. Featuring the exemplary musical skills and sympathetic production of the great Mark Griffiths, it is a gem of a record, certainly the finest ever to come out of Northampton. You know, I don't even know where you can get a copy. Doesn't mean you shouldn't look for it, though. Even in this 21st Century Tom and Guy were still hopping across the Atlantic to play, even getting themselves on the radio, gigging in Nashville, Tennessee and up in the hills of West Virginia.

Tom Hall also uttered the funniest single word that I have ever heard. We were in Slurps Wino Bar one night. Tom was having a drink and minding his own business. I was across the other side of the bar, trying to do the same, despite finding myself in the midst of a pack of well-oiled and increasingly vocal Australian types. Onstage was a young man, locally known as "Dead Justin", performing some ludicrous poem he had written. Justin had an accompanying slide show. I think he reckoned he had some kind of William Blake thing going on. Whatever, when the slide of the local public library went on above his head, things started to spin out badly. Locals were guffawing at 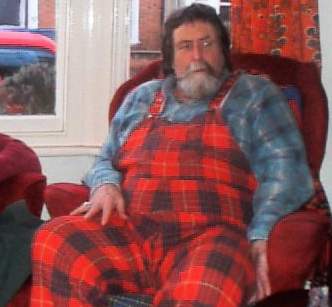 the simple-minded earnestness of it all. The Australians were starting to riot and say naughty things about the royal family. As the situation slid out of control, there was some kind of technical breakdown on stage. Superb. Utter chaos. People yelling, laughing, rioting...when a voice calls out, rich, fruity and imperious.

It's Tom. and he's shouting: "SECURITY!"

Tom Hall was a complete and utter original. I went to see him sing and play every time that I could. Like every musician in Northampton I looked up to him. It wasn't only his dangerously brightly coloured clothing that intimidated me, but he showed nothing but kindness and support to me and all the other younger musicians in town who were trying to make a go of what he had already done, dusted and left behind.

I remember one Sunday morning during the making of "Illuminate" when for some odd reason I was feeling unusually down and battered. Arriving at the studio, I couldn't get in. Nobody was around and I didn't really know where to put myself. As I milled about in the alley, without a penny or a clue, Tom strolled past. "Come and have a brandy, dear boy!" He was 50 years old, I was 38. Long before that autumn sunday lunchtime I had happily drunk with Peter Buck, Mark E. Smith, Alan McGee, Country Dick Montana and Tom Waits. One day in Waterloo in 1988 the "great train robber" Buster Edwards had bought me a double brandy. Yet here in this dangerous little Northampton lowlife bar with Tom, I felt like a little kid getting a special glimpse into the grown-ups' world. With his impeccable old-world courtesy and genuine concern for a fellow musician he restored me like the special genius spirit he truly was. Yes, yes, I know what I just wrote there.

And yes, Tom liked a drink. And yes, that was probably what did for him in the long run. I think that most likely everybody reading this piece will know the score there. Tom was beautiful and damaged and deep and unrepentant. And people have been earnestly telling me that Shane MacGowan was close to death since 1984. Some of the best of us really are indestructible. The fact that Tom's body has finally given out on his elegantly ferocious appetite for life in no way means that he is - or ever will be - gone for those of us who loved him.

Ride into the Sun, dear boy.